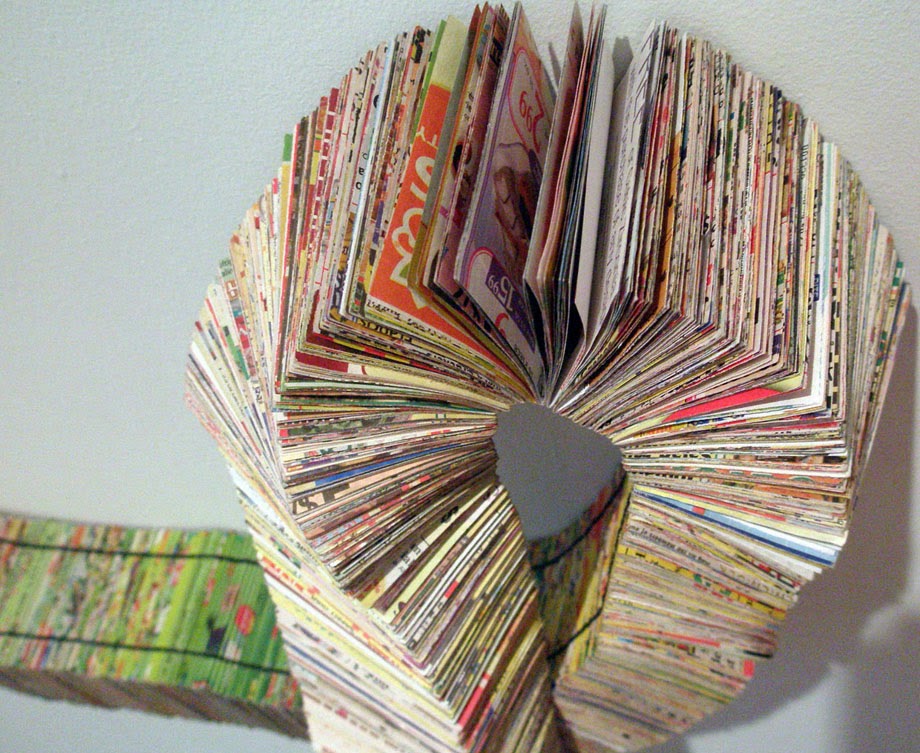 Amanda Nelsen is a bookmaker who dwells in a depository of paper fed by profligate advertisements, the modern day nuisance of recurring junk mail and the loading of the mailbox with banal information. Juxtaposing a historic structure such as a book form, with the contemporary terrestrial materials of weekly circulars, she locates the colors, texts and textures within credit card offers and coupon books and converts them into time-honored book forms. By following the traditions and conventions of a treasured form, she challenges the standardized fallow use of paper and printing resources.

From Amanda:
My art practice involves collecting, culling, editing, and assembling. In order to gather and bind paper my hands must fold, score, and jog; my knife must cut; my awl must punch; and my needle and thread must dance in a pattern--in, out, and around; in, out, and around. This repetition requires attention in each step and mindfulness of the building up of materials--the growing of the piece. The manner in which an idea grows and the point at which a piece is complete depend on the materials involved. Through this repetitive work with the materials, the rhythms in print become the marks of other creations.

Amanda  is currently the Program Director at Rare Book School in Charlottesville, Virginia. She moved to Virginia from Cambridge, MA in 2010 where she taught courses at the Art Institute of Boston and New England School of Art and Design as well as bookbinding workshops through North Bennet School in Boston; worked at Quercus Press in Waltham; completed an Artist-in-Residence project at Wellesley College; and maintained a studio in Somerville. Amanda is a Studio Art/Art Education graduate of St. Olaf College in Northfield, MN and received her MFA in Visual Arts from the Art Institute of Boston at Lesley University. In 2007, she earned a certificate in Bookbinding from the North Bennet Street School and was a 2008 Joan Mitchell Foundation MFA Grant Recipient. Her work has been exhibited nationally and internationally, most recently at the Corcoran School of Art and Design in Washington, DC.

Click here and here to learn more about Practice.
I will be introducing each of the six invited artists of Practice over the next couple of weeks leading up to the opening on March 12. For more info read about Caleb, Stephanie, Hannah, Zsuzsi and Julie.
Posted by Jodi Colella at 6:51 AM No comments: 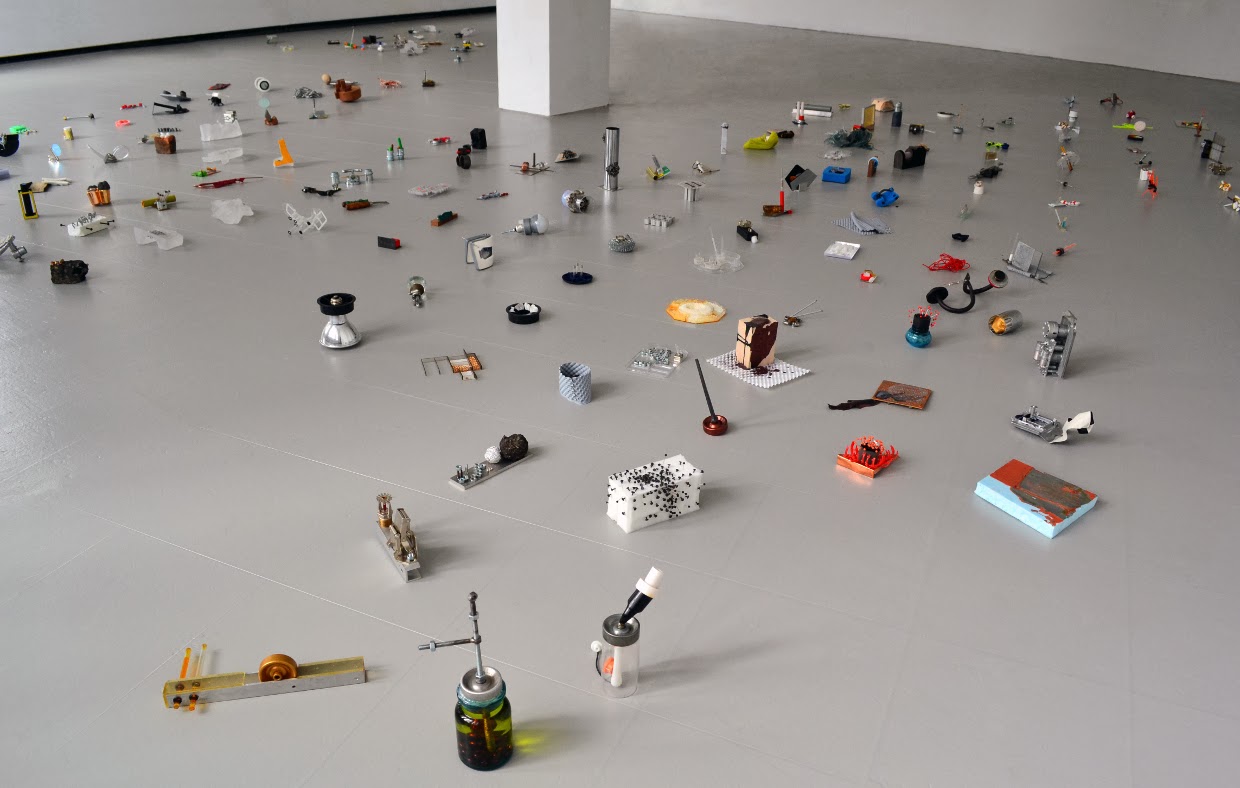 For Mnemonic/Periodic, Julie created two hundred sculptures in a month and then locked her studio door. After four days, she tried to remember as many of those sculptures as she could, keeping track of her recollection with sketches and annotations. When she had exhausted her memory, she returned and installed the sculptures in a grid on the floor according to the order in which they were recalled. The forgotten sculptures were in another part of the room. She noticed that the relationship between the fury of creation and the torture of remembering was lost in the field she had created, reducing something ineffable to a mathematical and statistical visualization. This absurdist gesture is a playful, intricate microcosm of her artistic practice, which requires self-imposed rules in order to surprise and challenge preconceived notions.

A poster of the Periodic Table along with a sampling of these sculptures will be on exhibit in Practice at the Nave Gallery Annex this March/April. They are compelling explorations of form, material and space.

Julie Kamlesh Kumar was born in Anchorage, Alaska. She received her BA in Honors Visual Art from Brown University in 2007, where she was awarded the Anne Belsky Moranis Award for Excellence in Art. She has been an Artist in Residence at the Oregon College of Art and was one of six chosen by an international jury to be an Emerging Artist in Residence at the Pilchuck Glass School. In 2013 she graduated with an MFA in Sculpture from the Rhode Island School of Design, where she was supported by the prestigious Presidential Scholarship and a juried Graduate Studies Grant. She has shown in numerous locations nationally, from the Rhode Island School of Design Museum to the Warwick Museum of Art. In November 2013 she was featured in Artscope magazine for her work in the show The Order of the Universe at Wheaton College in Massachusetts.

Kumar lives and works in Brooklyn. She is currently and Artist in Residence at SOHO20 Gallery in Chelsea, and is planning her solo show at This Friday or Next Friday Gallery, There are No People. 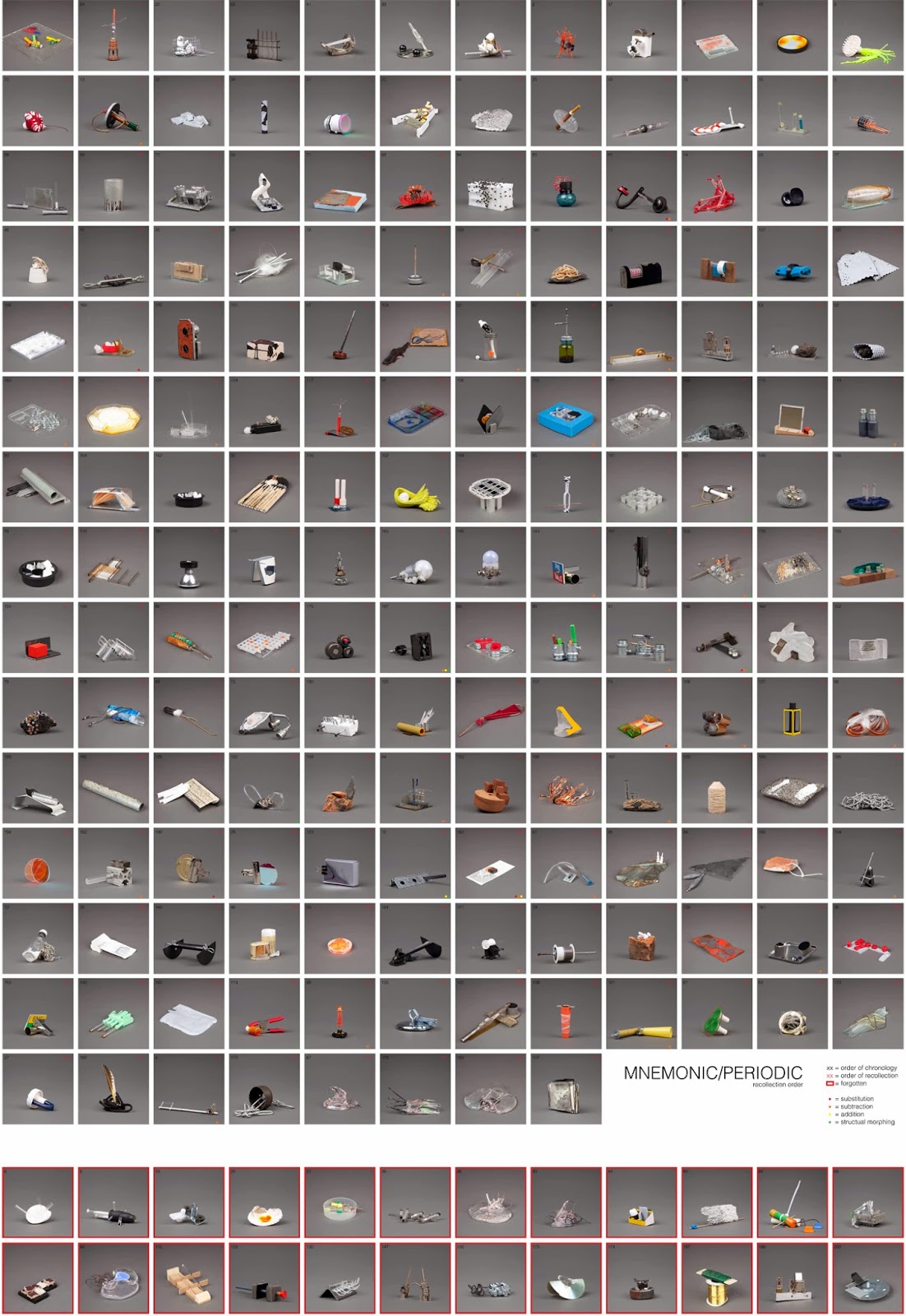 Click here and here to learn more about Practice.
I will be introducing each of the six invited artists of Practice over the next couple of weeks leading up to the opening on March 12. Visit earlier posts about Caleb, Zsuzsanna, Stephanie and Hannah.
Posted by Jodi Colella at 5:45 AM No comments: 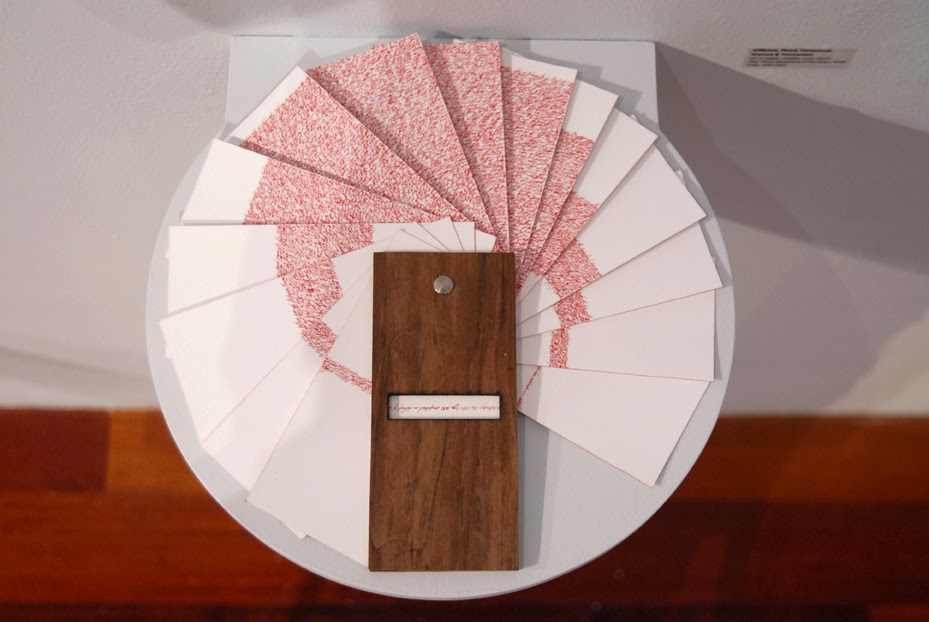 Handwritten text features prominently in Hannah Verlin's art as both repetitive texture and content. Some writing is original, but most is transcribed from historic texts, traditional songs, and collected data. Although the writing is nearly illegible, it imbues the art with the significance of the source material and the compulsive energy of the writing process. The very act of writing by hand transforms what were just words into a kind of prayer and remembrance, to create an intimate connection with what was once remote. It is a way of expressing complex ideas simply, forming expressionless data into something meaningful and beautiful.

Hannah was born outside of Philadelphia in 1983. In 2005 she received a BFA from the School of the Museum of Fine Arts (SMFA). Her recent solo exhibitions include, Far Away Up Close (Montserrat College of Art, 2012) and Fates & Furies: America (Boston Sculptors Gallery, 2012). Her temporary public artworks include Letters to Medford (Medford MA, 2013), Thoughts Are Free (Medfield MA, 2012) and Love Letters (Davis Square Bike Path, 2012). In 2014 she will be creating installations for a National Parks trail system in New Bedford, MA and for the Brooks Estate in Medford MA.

As a featured artist in Practice at the Nave Gallery Annex this March/April, Hannah will be exhibiting works from her time spent as a visiting scholar at the New Bedford Whaling Museum in 2013.

Click here and here to learn more about Practice.
I will be introducing each of the six invited artists of Practice over the next couple of weeks leading up to the opening on March 12. Read earlier posts about Caleb Cole, Zsuzsanna Szegedi and Stephanie Metz.
Posted by Jodi Colella at 5:57 AM 2 comments: