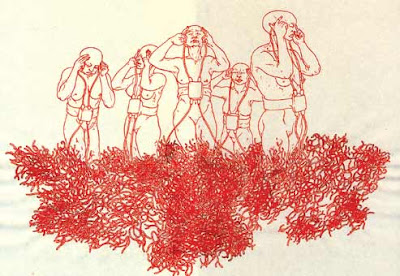 I have great conversations with people when visiting my current exhibition BEASTIARY. It's one of the perks of sharing your work, you get to experience other people's connections and I always learn something. There's a week left to the show, but I've already made two big artist discoveries, one is Leigh Bowery who I will get to later, and the other is Bea Emsbach.

Bea Emsbach is a painter who has been working on a series of red ink drawings called ‘Beutezüge im Bodensatz der Wissenschaften’ (Raids in the Sediments of Science) since 1995.

Human figures, heads, busts and sometimes vague approximations of faces are repeatedly isolated on the page. Many are rendered as outlines, surfaces are uniform, people look generic and are often sexless. What links the work is a feeling of proliferation and metamorphosis.  – Anita Beckers

It's the feeling of proliferation and metamorphosis that resonates for me. Eery, mysterious, tactile and seemingly detached.

I can't give you names because I either can't find references or they're in a different language. I prefer it this way, not having words telling me what to think. I think that's her point. 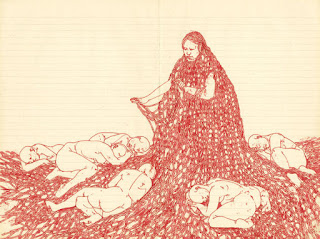 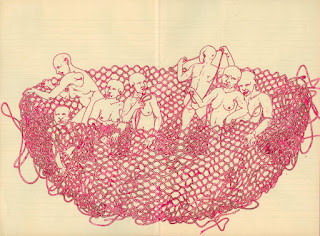 Posted by Jodi Colella at 4:01 PM No comments: