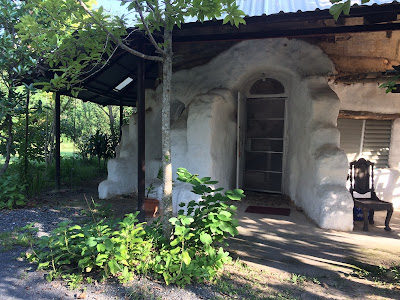 My first days here at Compeung were spent reading, listening to podcasts, sleeping and eating home cooked thai food. A wonderful respite after an exhausting journey. 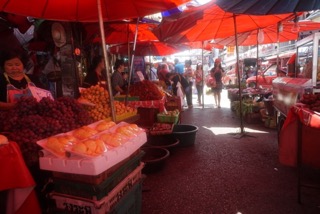 For one of my first adventures I found my way to the Warorot Market in Chiang Mai. I kept seeing these enormous spools of white cotton thread. It seemed they had a function more than as white string because they were always situated next to other ceremonial items like candles and lanterns. Compelled, I bought some and brought it back to Compeung where I learned from Ong that it is called Sai Sin and is used in Buddhist ceremonies, weddings and funerals as a conduit for connection. 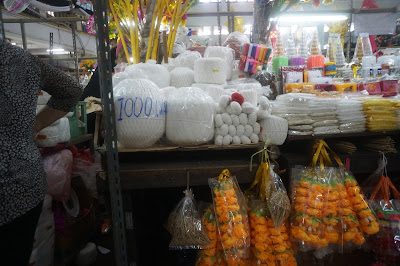 At larger ceremonies there is often one big ball of string which is first tied around a Buddha image before being passed along to the monks in attendance. From there, the thread is passed along to everybody else in attendance. With each individual holding their hands in a wai, the thread is looped around each person. The thread may be strung around a person’s fingers or it can be looped around their head. The important thing is that the thread links everybody to the monks and the Buddha image. The chanting of the monks and the associated merit is then symbolically passed along the thread reaching all of the people in the congregation.

Later that day I was listening to an interview with Ann Hamilton conducted by OnBeing’s Krista Tippett. She mentions the importance of cultivating a space that allows you to dwell in the ‘not knowing’. How ‘a thread has to come out and it comes out at its own pace’, and ‘how we need to trust the thing we cannot name’. All of this is uncannily relevant for me given that I’m currently very far away at a residency with the sole purpose of providing time, space and experiences to enrich my next steps.

Her interview got me thinking about my own sculptures and how they show the presence of the human hand but through embroidery and other process oriented needlearts techniques. Hamilton inspires me to push this idea of 'embodied knowledge' and create entities that express human touch as simple abstractions that communicate through the material of the human body. 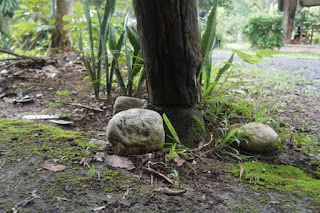 This brings me to what I started playing with at Compeung today.  I’m finding rocks on the grounds around my house and removing them carefully so as to not disrupt their spaces within the soil and fauna (a heroic act in the land of scorpions and centipedes). I then wrap each of them with the white string I brought home from the market.

Symbolically, Sai Sin thread adds merit, protection and strength as it motions in a continuous circle. Personally, wrapping becomes performance, a meditative ritualistic act that 'takes information at the pace of the body while moving in space'. 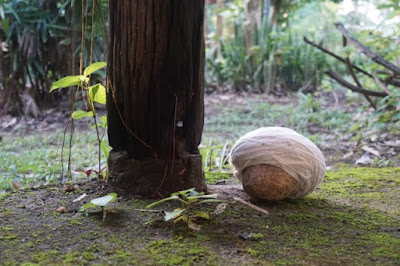 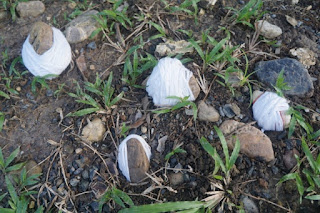 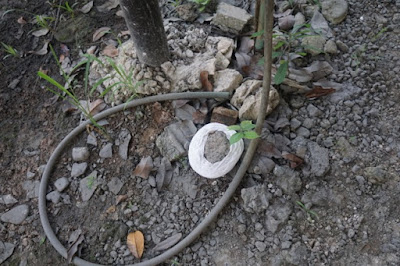 When complete, I return them to their original location and in the exact footprint from where they were found. Each day I’ll add a few more. I consider these to be blessings and have been calling them my Touchstones. They’ll remain installed after I leave, the string will fade away naturally just like with the Buddhist ceremonies. 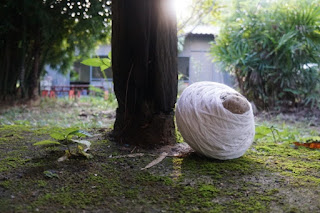