A quick post just to share the final cuts of two videos that I've been working on with super talented Chris LeGare. Chris and his biz partner Corey have been helping to document both Re:Constructed at Regis College and the HIVE project.

HIVE in its material form has been a launching point for two other bodies of work IMPRINT and TRACES. Now it embodies yet another medium.

Here are two videos so far - both having to do with HIVE. One is a teaser... something that I'll use very much like a video postcard. Please click here if below isn't cooperating.

And the other is a more comprehensive overview with audio exposition, great images and animation. Or click here.


So excited to have this and can't wait to see the final video about Re:Constructed... Chris tells me that it's about to launch - like next week!

For more HIVE, visit the Danforth Museum of Art today from 4-6pm. I'll be there facilitating another HIVE gathering. The museum is open for free tonight, Thursday Jan. 31, a great opportunity to view all the other exhibits including my collaboration with the teen docents.

A very special thank you to all who have participated and contributed themselves to the fabric of this project.
Posted by Jodi Colella at 6:28 AM No comments:

the event of a thread 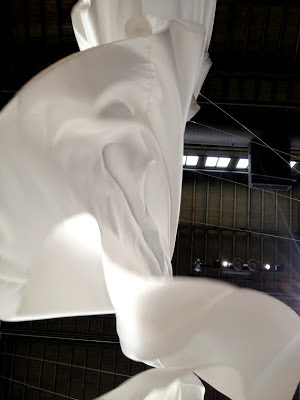 I recently visited New York with the purpose of seeing Ann Hamilton's show the event of a thread at the Park Avenue Armory. 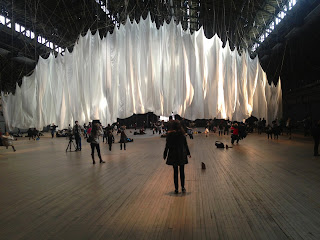 I've been following other peoples' posts about their visits and share in their sense of awe and wonderment of it all. I have difficulty finding the words or capturing in photos the ethereal nature of the experience. And that is what Ann Hamilton is about apparently. Here's an apt description of work found on Wikipedia:

Using time as process and material, Hamilton's methods of making serve as an invocation of place, of collective voice, of communities past and of labor present. Noted for a dense accumulation of materials, her ephemeral environments create immersive experiences that respond poetically to the architectural presence and social history of their sites. 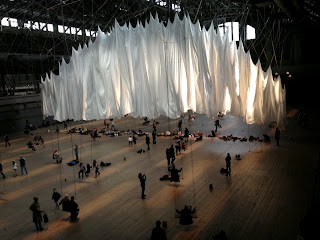 For me, a key word is immersive. In a space as large as the Park Ave Armory, it is mind boggling how this installation works to both fill the space plus intimately relate to the individual - connecting hundreds of people to that particular moment in time and place.
According to Hamilton, "No two voices are alike. No event is ever the same. Each intersection in this project is both made and found." 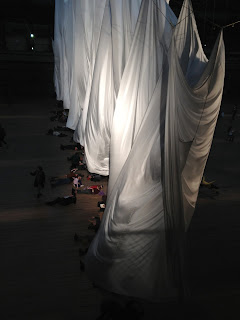 There are 42 swings scattered on either side of a very large silk swath of fabric. The fabric moves and dances in response to a system of pulleys that are connected to the swings. There is a direct relationship between the actions of the swings and the billowing of the cloth, as unique as the combinations of individuals that are swinging on the swings at any given time. 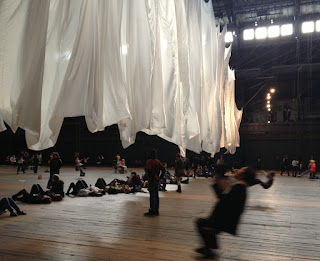 "Suspended via ropes and pulleys by a field of swings hung 70 feet from arched iron trusses, a white cloth more than twice the hall's width and nearly as tall is the central figure in the space. Whether a tug of war or a unison effort, individualized or coordinated, the responsive liquidity of the silk registers the combined velocities and accelerations of the field of swings. The shifting weather of the white cloth is generated through collective action. A common activity perhaps reveals our kinship with bees, ants. and cranes: all united as Aristotle's 'social animals' undertaking the same action for the elevation of the whole." 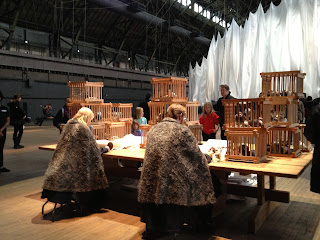 At the entrance of Drill Hall and facing a flock of caged pigeons, two readers read aloud from scrolls.  The texts, which change daily, are by authors from Aristotle to Charles Darwin to the poet Ann Lauterbach. Words from the readings stream as nonsequitors between the two readers in regular intervals and are transmitted to radios encased in paper bags placed on the floor throughout the armory.

"Words allow us to travel while the tactile keeps us present; a rhythmic exchange of reeling out and pulling in that is also the swing's pendulum." 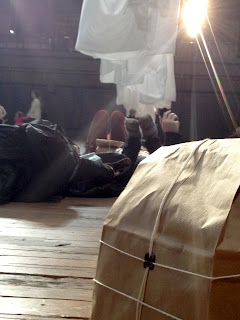 When swinging forward and back, the sounds from the paper bags swing from loud to soft and loud again. Adding to the immediacy of the moment and articulating the flightiness of time. Also, the day ends with a live vocalist performance which is recorded and used to begin the show on the following day.

"The plainsong, cut live to vinyl lathe - from center to outside edge, a motion repeated when played each morning after - returns the recent past to the current moment." 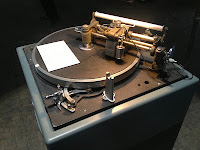 Hamilton's work is known for requiring people to slow down and now I understand exactly what they mean. I needed to be present at the show for quite a while before actually comprehending my experience. It was monumental yet intimate. It felt grand yet personal. It reached out and pulled in.

"If on a swing, we are alone, we are together in a field. This condition of the social is the event of a thread. Our crossings with its motions, sounds, and textures is its weaving; is a social act." 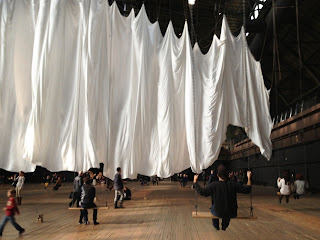 There is so much to think about. I feel like I witnessed something momentous, and by participating, that I was part of something much bigger than myself.

Ann Hamiltion will be speaking at Harvard University and Mass College of Art and Design this April - I can't wait.

Posted by Jodi Colella at 9:06 AM No comments: 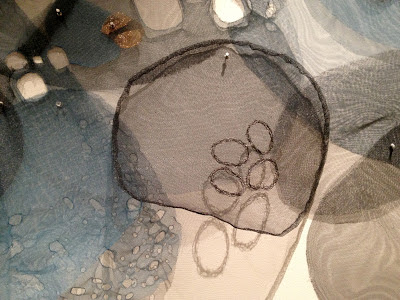 In conjunction with the HIVE installation at the Danforth Museum, I've also been working on another collaborative project with the Teen Docents. The materials are the same, screen and wire, but the mission is different - a composition inspired by the cellular world - similar to another screen artwork of mine called UNDERCURRENT (2008). 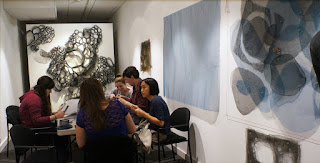 We are meeting each Sunday in January with the goal of laying the foundation for two 4x5 ft compositions. In the first meeting, they were introduced to the properties of screen and steel wire and asked to innovate their own organic expressions. 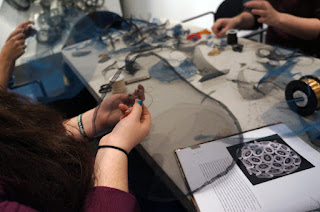 As much experience as I have working with this material, there's always something new to learn - especially when viewing it through the eyes (and hands) of others. I provided photographic images of biological forms as reference and for inspiration. Their results are magical transformations of material into expressive shapes and shadows. 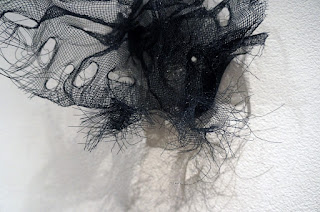 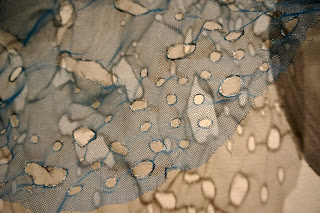 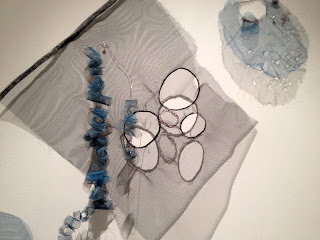 After only two meetings we've almost completed the first design and are ready to launch into the second. 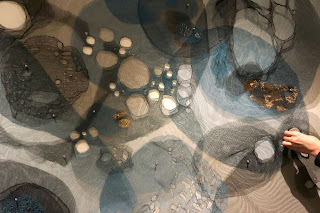 We don't expect to finish in January. There are hours of details to be considered and that requires more time than we have in our short month together. The foundation, however, will be solid enough to guide me in the completion of their vision. 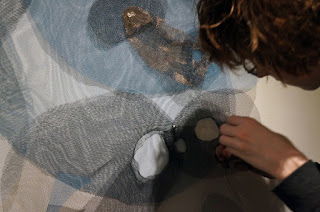 Stay tuned! We'll be posting weekly updates of our progress.
Posted by Jodi Colella at 4:41 AM 2 comments: 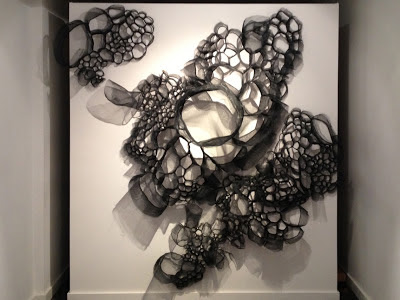 I'm thrilled to announce that HIVE is currently exhibiting at the Danforth Museum of Art in Framingham, MA. It will be in the installation room for the month of January 2013.

HIVE is a collaborative project that explores the chemistry among people when they work together with hands busy and minds free.


Aluminum screen chambers are stitched with steel wire and assembled into a growing matrix representative of the community effort and time spent together.

The material is non-traditional but suggestive of fabric.
The wire stitching is simple, welcoming all levels of experience to participate.

The result is a sculpture that grows organically from the contributions of chambers that are as individual as the participants who create them.

HIVE is currently hanging and growing in the installation room of the Danforth Museum. I will be facilitating three gatherings in January to introduce more participants to the project.


You are cordially invited to join us! 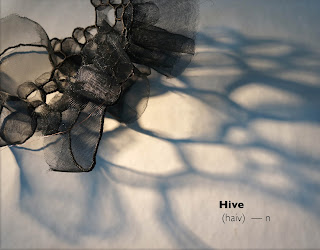 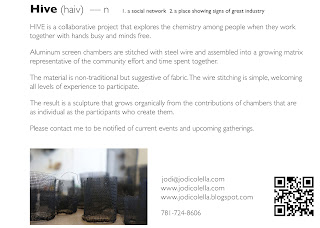 We're a week into the new year and I'm already sprinting.

Though today is my first official day back I've actually been at work since last week. My show, Re:Constructed at Regis College was deinstalled last Friday, a major feat to pack and move. I've been teaching a bit. And yesterday I initiated my HIVE installation at the Danforth Museum in Framingham, MA. This is a month long interactive exhibit working with the Teen Docents and the Drop into Art Program that happens at the museum on Sunday afternoons. 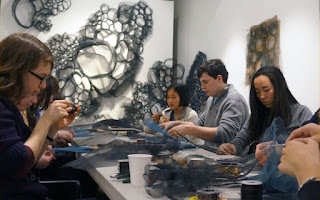 Teen Docents working together on HIVE at the Danforth Museum - a place of industry
whose progress can be witnessed during the month of January.

Earlier in the week I visited NYC to see a few mind boggling exhibits: Ann Hamilton's An Event of a Thread at the Park Ave. Armory, Lin Tianmiao Bound Unbound at the Asia Society, Rosemarie Trockel A Cosmos at the New Museum and Mickaline Thomas Origin of the Universe at the Brooklyn Museum. My head is spinning with information and ideas.

I'll be writing in more detail about all of these events in upcoming posts but today's entry is designed to help me organize my thoughts around the many things that I'm dying to share.

Finally, I'd like to take a moment to reflect on and appreciate all the support received in 2012 and all the promise of 2013.

Cheers!!
Posted by Jodi Colella at 8:26 PM No comments: