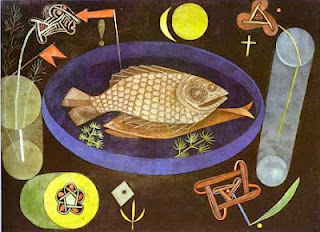 Day 5 Fisches and birds / Paul Klee 1926
I'm in that in between space of contemplation, and hopefully soon to be, revelation. That place where you need to take an inventory of your musings to find direction. Sometimes this is anxiety provoking and feels aimless, but this time I'm having fun with it. Especially with several exciting commitments already in place for 2013.

Yesterday I visited the Paul Klee exhibit at the McMullen Museum, Boston College.  I was impressed by how much of a theorist Klee was with his Bauhaus teachings and prolific diary entries. Sometimes these shows can seem dated and that's how I felt at first with this one. It was presented academically, which stole some of the thunder in experiencing the artwork, with labels requiring too many paragraphs to provide context. It becomes meaningful, however, when you place him within the historical context of the early 20th century and recognize how his philosophies created a framework for contemporary art.

One thing that repeatedly strikes me is how similar the struggles are with artists across all time periods. With Klee, one of his interests was the abstraction of nature and not the accurate representation of the physical elements. "Not the skin of things... Nature naturing". Believing that humans were part of this nature his artworks also represented themes of fear, dissonance, and towards the end of his life, physical disability and mortality.

Another subject of his that keeps bopping around in my head is one where he talks about individual vs. dividual. First, I learned a new word: di-vid-u-al  1. divisible or divided  2. separate; dinstinct   3. distributed; shared. For instance, scales on a fish are dividual, distinct elements of the whole fish. The fish, however, is in-di-vid-u-al: 1. not divisible  2. a group considered as a unit. The scales can exist on their own. The fish cannot exist without the scales, or it's head or fins for that matter either.

I definitely can identify with this, especially when you combine it with his feeling that art should be "imbibed by and impregnated with evidence of the process". In my case, the meditative process and incremental building of units into larger wholes to express the intangible.

Well, I'm off to sit with my random, unorganized thoughts. Thoughts about human nature, process, social engagement, design and the transcendence of making - all topics that I look forward to have bopping around in my head for quite some time.

Posted by Jodi Colella at 8:25 AM No comments:

Here are some photos of the show! For even more views click here. Please check back often... I'll be adding to the album frequently as the month progresses. 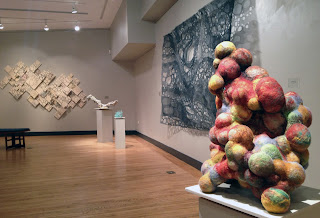 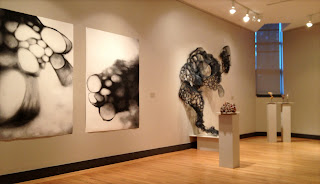 The reception on Friday night was a very nice time with lots of good conversation and positive feedback. The opportunity to see all of my large works exhibited in the same space is invaluable. The conversations that are happening between them at the Carney Gallery just doesn't happen in the confines of my small studio. It feels cohesive and strong. The lighting and display arrangement around the space of the room refines the flow in a magical way - thanks to gallery director Steven Hall for all of that.

The show is up until December 30 and I'm planning on holding some HIVE meetings and teaching sessions in the space over the next month. There will be a photoshoot after Thanksgiving and I will post images of the works then. In the meantime, please contact me if you're interested in seeing for yourself... I would love to meet up with you.

Posted by Jodi Colella at 4:51 PM No comments: 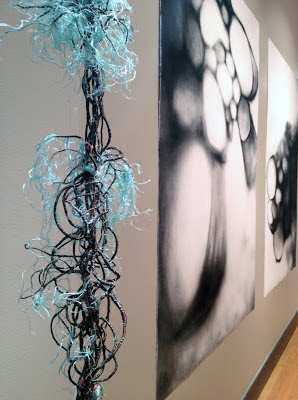 Catching up on many levels this week and it hasn't been without its drama. Packages of artwork lost on UPS trucks in the middle of the storm, galleries losing power for two days, transportation issues etc. Nevertheless my solo show at Regis College, Re:Constructed, is finally coming together - and beautifully. 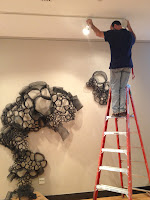 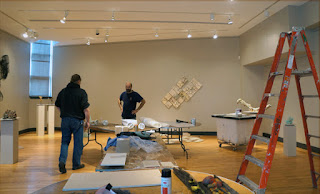 It's been a methodical process to figure out the space, the hanging, the lights etc. Steven Hall has been invaluable in making this one of the better experiences I've ever had installing a show. He possesses a keen eye for design and knows how to handle any problem with grace. I'm very much looking forward to the reception on Friday, Nov. 16 from 5:30-8pm.

Tomorrow, I'm on my way to Toronto to attend several receptions for the World of Threads Festival. Four of my pieces are participating in two of the many shows that have been organized. A massive international event and I can't wait to take it all in. Check here and here to view the two shows I will be participating in with One Day, What Looks Like An Elephant, Marrow and Receptor.

The only unfortunate aspect of being in Toronto this weekend is that I'm going to miss the reception for Threads Bared, a fiber exhibition at Nave Gallery in Somerville. But I will most definitely make it to the Cupcake Reception on Nov. 17 which is part of the Wrap Around Project for the Somerville Homeless Coalition. Tori Costa is the generous and energetic organizer of these fundraising events along with the twice monthly knitting groups that work all year long to generate items for the sale each November.
Posted by Jodi Colella at 3:26 PM 2 comments: 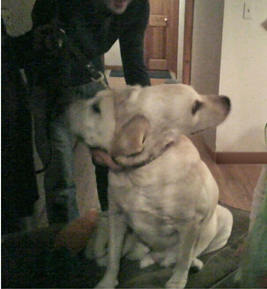 Meet Gideon, a Golden Lab who loves to masquerade on Halloween and belongs to my friend Melissa. Melissa participated in one of my needlefelting workshops last year and has been expanding her talents with the technique ever since. 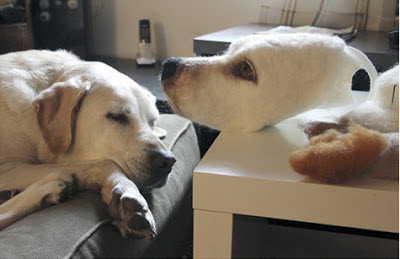 As you can see in the photo above, she sculpted an exact replica of Gideon's head using high density foam which she carved to the exact dimensions of his head, forehead and snout. Then she needlefelted in a painterly manner with colored wool to add the features. She even designed a device to attach to the ears so that one set of ears serviced both heads - the real one and the felted one.

Below is a collection of images by the artist... a clever trick to pull off and a real treat for us to see.

Thanks Melissa for your inspiration! 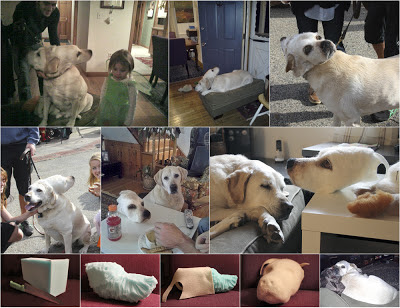 Posted by Jodi Colella at 8:51 PM No comments: