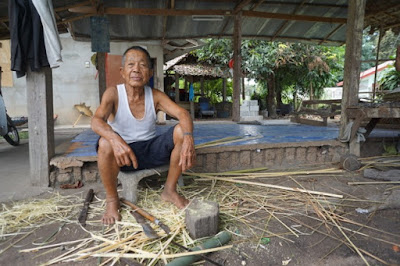 My residence at Compeung is down the street from Compeung Lake. There’s a narrow road along the banks of the river where I ride my scooter into the village. Tucked into the woods along the way you pass shrines, a thai massage parlor, a noodle maker and this wonderful thatched roof patio where, depending on the day, a smiley gentleman sews grass roofs or weaves baskets. My host told me that this maker welcomes visitors and so I set out to see what he is up to.

He was making reeds for baskets from a large bamboo stalk. Tomorrow, if it doesn’t rain, he’ll be gathering grasses so that the next day he can sew some grass roofs. I’m hoping to catch him when he’s sewing so that I can learn. I’ve seen him working from the road… it will be great to get up close.

This is the closest thing to authentic making that I’m experiencing.  All other opportunities involve staged showrooms and tour buses. In the mountain villages, the reality of daily life forces most people out into the fields or to the city for work… only the physically disabled or elderly stay home to look after children and work on folk handiwork for the markets.

The notion of maker communities is a romantic one that I have the privilege of living and believing in as a westerner. It is not so romantic here, most people do it out of necessity to eat and put a roof over their head and most are working alone.


A week before I arrived the beloved king of 70 years passed away. Chiang Mai is cloaked in white and black and according to locals the news is all about ‘the black and white’ too. There is a serious political undercurrent among people who feel uneasy about their future as a democracy.  It is unlawful to speak about the royalty or the government with punishment of arrest thus inhibiting individuals from talking to each other and organizing for fear of reprisals.
Brings to mind Ann Hamilton’s interview with Krista Tippet where she opens with the question “Where is it that we can gather and kind of be alone together?” She says there is so much Us and Them and we need to think about how we can all exist in the same space.

Today, I’ll continue with my naïve pursuits of connection. I’m looking for makers in the broad sense. Makers of community here at Compeung, makers of artisan food in the market and makers of roofs ­– to sit in the company of each other, alone in our foreignness, but together in our shared place and time.